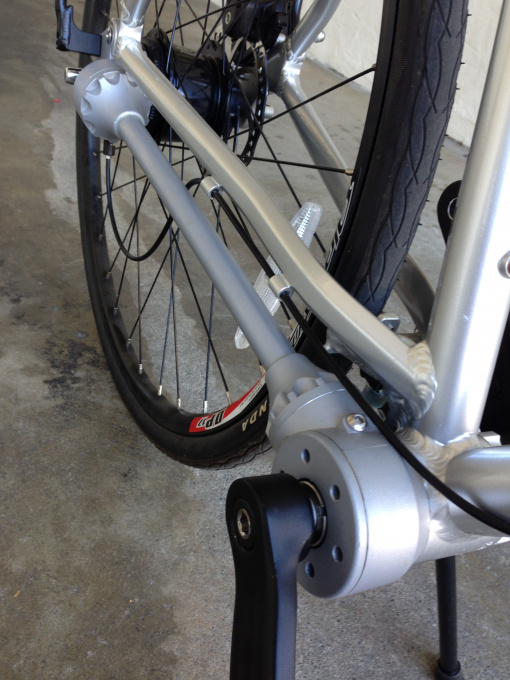 Replacement chainless bike after the first one was stolen!

Went for a ~15 mile ride with no issues. Nice smooth ride. No slipping. One click. Some back-pedal to shift up.

The small parts kit arrived (SM-S7000-8) and includes cassette joint CJ-S7000. The cassette joint had to be heavily modified to fit with the chainless cog. I had to almost completely remove the outer ring and grind down the underside so it would lock into place and fit the lock ring. Mostly used a rotary tool to grind the plastic down. Used a file to cleanup and even things out a bit.

I also had to modify the chainless drive shaft housing to fit the cassette joint. That was easy with the grinder/metal cutting blade. The cable still rubs a bit on the metal, but it is getting close to the cogs, so I'm not sure if I want to cut into it any further. Might just keep an eye on the cable for now and grease it up when needed.

Went for a decent test ride. Shifting down is smooth. Shifting up sticks a bit. If I peddle backwards after shifting up that helps move it into place. No slip, so I think the original issue is fixed. Shifting up may have been caused by the long cable end rubbing the housing cover since shifting while parked with the cover off works fine. I cut the cable, but need to get some cable ends.

The wheel needs to be trued up and I need to think of a better solution for the cable (and add a cable end). But for now it is ride-able and better than it was. It's funny I've been cursing the chainless for a while now and I think the main issue might have been the Alfine hub.

More work than expected as usual. It really is a nice ride when everything is working.

Replaced alfine 8 speed hub. Hoping to fix some gear slip issues. Had to remove all spokes and rear brake disk to remove the old hub. Waiting for the small parts kit since the old one does not fit on the new model hub.

Finally installed new shaft drive and got the chainless back on the road. It still slips occasionally under hard pedal pressure. Added more grease and that helps. Still more maintenance than expected. Great for casual rides around town.

Shipped the shaft drive today. It was difficult to remove. I had to purchase a new plumbers wrench to remove a huge nut around the crank shaft (BB case). At first I used a large vise grip and hammer thinking I could loosen it up. After probably an hour I made one full rotation and it was still too tight to turn with my body weight / leverage. The vise grip was just too small. So with the large plumbers wrench I was able to position myself under the frame so it rested on my shoulder while I pushed the wrench down. That gave me enough leverage to turn it by hand and remove it the rest of the way fairly easily. Other than that the rest was easy enough and the wrench was only $15. It'll be good to have, I'm sure I'll need it again some day.

Still having issues with the shaft drive. I think they are due to the right cover (face plate) being loose for so long. I wish I had noticed sooner. The manufacturer has agreed to send a replacement shaft drive under warranty. I need to remove the old one with a crank puller and allen wrench, then ship it.

The grease came. I applied some to the front and back. The loctite is working the front face plate on the shaft drive is staying nice and tight now as it should. Riding nice and smooth now. Still a click once in a while, but not bad so far.

Well, that turned into a bit more work than I thought. The front part of the shaft drive kept coming loose. I called the manufacturer and they suggested adding some loctite red. I ordered some of that and put it on there today. Unscrewed the loose part as far as it would go, cleaned it up and add a lot of loctite and tightened it as hard as I could. Now I will let it sit for 24 hours and test ride it tomorrow to see if that worked. Also, still waiting on the grease.

Symptoms: gears were slipping bad. Applying pressure to the pedals were causing them to slip hard... I almost fell on my ass trying to accelerate from a stop light. Not safe. I almost lost my faith in chainless bicycles today... until I got it fixed and took it for a test ride.

Fix: first off I tightened up the shifter cable and checked that the marks on the rear hub lined up in 4th gear. That helped a bit. I took it for a spin and it still slipped hard while applying pressure. Damn it! So I removed the right side crank arm / pedal and noticed that the face plate on the front hub / front part of the shaft drive was very loose and some grease was leaking out... fail. I tightened that up by fitting two allen wrenches in the holes on opposite sides and turning hard. There are about 6 holes all around. Now I took it for another test ride and everything felt much more efficient with no slipping. I've been missing out. I wonder how long that piece has been loose and slowly getting looser. Anyway I hope there is no permanent damage and plan on adding more bearing grease soon. Ordering it now. Also adjusted disk brakes.

The fenders didn't fit well with my new bike storage, so I removed them for now. I need to try some of the removable fenders soon, as there is more rain in the forecast, but not much. It was surprisingly easy to remove the rear tire. Loosen two bolts, slide the fasteners down the bolt and that's it! Slide the tire off. No greasy chain to mess with and no loose parts.